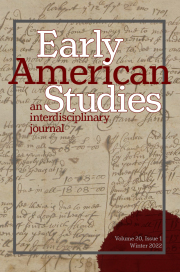 Early American Studies: An Interdisciplinary Journal is a quarterly, peer-reviewed journal sponsored by The McNeil Center for Early American Studies at the University of Pennsylvania. The journal publishes original research on the histories and cultures of North America and the Atlantic world before 1850. The editors welcome contributions from scholars working in a variety of disciplines concerned with early America, including history, art history, literary studies, religious studies, music, philosophy, and material culture studies, among others. They are especially interested in works that employ interdisciplinary methods or source materials.

Visit EAS Miscellany, the digital companion to the journal.

Like its eighteenth-century printed predecessors, EAS Miscellany features an eclectic range of content, from posts written by the journal’s authors, to interviews, reviews, forums, resource guides, multimedia sources, and other materials that don’t fit easily within the printed journal.

Congratulations to Ann Ostendorf, winner of the Conrad Prize given by the Louisiana Historical Association

Ann Ostendorf’s article, “Louisiana Bohemians: Community, Race and Empire” in the fall 2021 issue of Early American Studies (19.4) was awarded the Conrad Prize for the best article on Louisiana history in any publication. Ostendorf’s article traces the lives of thirteen French Bohemian (Romani) families who were deported to Louisiana in 1720 to explore the experience of displaced Romani. She argues that “over the next century. as Louisiana increasingly developed along new and more intransigent racialized lines, Bohemians navigated and helped construct this emergent racial order in diverse ways.” By tracing the descendants of the thirteen families, Ostendorf shows how “both self- and other-ascribed Bohemian identity eventually, if unevenly, lost relevance in French, Spanish, and U.S.-controlled Louisiana as other more powerful racialized categories and identities prevailed.”

The winner of the Murrin Prize for the best article published in Early American Studies during 2021 is Rachel Walker, University of Hartford. Her article, “Facing Race: Popular Science and Black Intellectual Thought in Antebellum America,” appeared in the summer issue (19.3).

Recipients of the prize, which is named for John M. Murrin (1935-2020), are chosen by a sub-committee of the editorial board. This year, Walker’s article was the committee’s clear choice for the award.  As they explained:

This essay delves into the complicated, ambiguous history of the Black intellectual reception of race science in the nineteenth century with exemplary clarity. With a multidisciplinary approach and a careful assessment of literature, political and scientific tracts, visual archives and photography, Walker reframes the strange entanglement of the racial and the facial in the history of scientific racism. Walker shows that Black intellectuals in the nineteenth century strategically “adopted and co-opted the disciplines of physiognomy and phrenology.” They accepted and contributed to contemporary scientific understandings of the body as manifestation of internal capacity in order to argue for the equality of Black people.

Read an interview with Rachel Walker about her research on EAS Miscellany.

Initial funds for the prize were generously contributed by Professor Murrin's former students. Additional contributions are welcome to endow the award in perpetuity. Checks should be made out to "The Trustees of the University of Pennsylvania," with "McNeil Center, Murrin Prize" entered in the memo line, and mailed to: McNeil Center for Early American Studies, University of Pennsylvania, 3355 Woodland Walk, Philadelphia, PA 19104-4531 Contributions are tax-deductible. Questions may be directed to mceas@ccat.sas.upenn.edu

Full-text content is available at this website through Project Muse. Current subscribers should select the Login tab in the top right and enter their login information. Select the Online Access link from the right menu bar to access content. This link will appear only after you have been validated as a current subscriber.

If you do not have your password, please click this Login Reminder Link or email us at journals@pobox.upenn.edu

The journal is published by the University of Pennsylvania Press. Business inquiries should be sent to Penn Press at: